I recently interviewed Mathew Berry, the man behind the music of Classified Frequency. He is a local musician who had just released Heart Attack EP. His music is exceptional, as is the amount of thought, time, and effort he put into his work. I wanted to tell people about how he did it. It is a business after all, and he achieved both his artistic dreams and business goals simultaneously. After writing the article I realized that I wasn’t telling the whole story. There was more than just getting it done. Matt realized his dream in a fiscally responsible way.

Every day I help people manage their personal and business finances. With most small businesses this is a very delicate balance. If the business owner overspends personally, it is usually the business that suffers or if business expenses get out of control the owner’s paycheck takes a hit. Poor fiscal management could be the number one reason businesses fail. When you combine this with the fact that most small businesses are started with the owner's personal savings it is easy to see how closely they are intertwined. 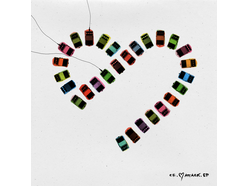 Two years ago Matt decided he would put together a professional sounding record. The process required as many business decisions as artistic ones. Matt was not independently wealthy so he needed to work his way through the project spending money on what he needed only when he needed it. As a bass player, he had accumulated a few pieces of equipment over the years. Early on he chose to get a stand-up base as well as his six-string not to help make a record, but for more opportunities to get gigs. Matt had a list of wants as long as his arm but knew that buying equipment that allowed him to make more money needed to be at the top of the list. As he put it “I didn’t just buy things because I wanted it.”

Matt worked his way through, teaching lessons at Victor Litz Music Center and Private lessons through B&B Music World. He also played with lots of local groups including Judo Chop, Side FX, The Fuzz, and Orange Line. A piece at a time he recorded the entire EP in his basement using Pro tools and the DIGI02 interface.

His decisions incorporated more than just cost. After more than a year of recording and re-recording the record was ready for mixing and mastering. Those processes aren’t cheap but he found the right people to do the job. The record was mixed by Jamie Woolford an idol of his. Vocals were engineered and co-produced by Dan Merceruio and the record was mastered by Doug Van Sloun. The goal was to produce a professional sounding record not just a record, so he needed to be sure to maintain a very high level of quality throughout the process.

To sell the record he weighed his options. “A run of CDs cost $400 – $500 and who goes to record stores anymore? … Most people make CDs to sell at shows but I don’t do shows as Classified Frequency.” He decided to sell the record exclusively on iTunes.

Good decision making requires lots of research and Matt wasn’t happy with all of his decisions. He used a one-step middleman called Tunecore to get his music onto iTunes. It worked for a reasonable price but didn’t allow for the functionality he was hoping for. “It was kind of a bad idea because there are all of these other middlemen and I didn’t do a lot of research because I assumed Tunecore was the one everybody used.”

Overall the record Heart Attack is a great success for Classified Frequency and music lovers. Hopefully, you can learn a lesson from it and achieve your goals responsibly too.